Neutron stars are the exotic end-products of stellar evolution. With masses ranging from 1.2 to 2.0 solar masses but radii as small as 10 km, their interiors approach nuclear densities and provide laboratories for the behavior of matter at extremes of temperature and pressure that cannot be replicated on Earth. Their large magnetic fields enable the formation of collimated beams of radio emission, and as they spin, their regular pulses sweep across our line of sight, allowing us to detect them as radio pulsars.

Searching for pulsars is a challenging problem. We use the world's most sensitive radio telescopes to acquire many Terabytes of noise-like data from the sky, and sift through them for the signatures of periodic pulses from the sky. Complicating matters, the ionized interstellar medium imposes a frequency-dependent time delay on these pulses ("pulse dispersion"), requiring a computation-intensive search in both dispersion measure and pulse period.  Further, some of the most interesting pulsars are in binary systems, requiring a search over the orbital Doppler shift parameters in addition to periodicity and pulse dispersion.

The PALFA survey uses the 7-beam ALFA receiver system at the 305-m Arecibo radio telescope to search for pulsars with unprecedented sensitivity. The survey data (about a Petabyte at present) are archived at Cornell and served to processing supercomputers around the world, as well as to desktop personal computers running the Einstein@Home screensaver. Some of the exciting discoveries are a young, highly relativistic binary pulsar, an eccentric binary millisecond pulsar in the Galactic plane, a young energetic pulsarcoincident with a TeV gamma-ray source, and the first pulsar to be discovered by global volunteer computing.

In addition to searches for periodic emission, pulsars can sometimes be detected by searching for individual bright pulses. For example, the Crab pulsar emits so-called "giant" pulses that would be detectable at Arecibo even if the Crab pulsar was at the distance of the Large Magellanic Cloud.  More intriguingly, some neutron stars only emit pulses sporadically. In fact, RRATs, rotating radio transient sources, typically only emit one detectable radio pulse over the course of many rotations.  As is the case for regular pulsars, these single pulses are also dispersed by the interstellar medium, and detecting them requires a search over dispersion measure as well as the development of algorithms and procedures that discriminate astronomical signals from local terrestrial radio frequency interference.

Along with neutron stars, other classes of sources may emit single highly-dispersed radio pulses. For example, Lorimer et al.reported the discovery of a bright pulse which, if real, is likely to be of extra-galactic origin. Such pulses could represent prompt emission from a gamma ray burst (GRB) or some other unidentified class of astronomical event, or they could be the result of some terrestrial interference process.

As our observational capabilities have improved, the Universe has been revealed to be extraordinarily dynamic, with violent, explosive events and enormous outflows of energy across vast scales.  The time domain is one of the wide open frontiers of astronomy, especially at radio wavelengths, where modern instruments are pushing the limits of field of view, sky coverage, and sensitivity.

Eventually, the planned Square Kilometer Array will probe the time domain radio sky to unprecedented depths. Meanwhile, pathfinder instruments are coming online now, including the upgraded Karl G. Jansky Very Large Array, as well as MeerKAT in South Africa and ASKAP in Western Australia.  By imaging large fields of view on the sky with a wide range of cadences, surveys such as VAST at ASKAP will probe source populations for explosive events like GRBs and supernovae, propagation effects in the interstellar (or intergalactic) medium like Intra-day variables and Extreme Scattering Events, and events powered by accretion and magnetic fields, such as white dwarf and neutron star flares, tidal disruption events, active stars and novae, etc. The true value of such surveys will probably lie in what they reveal about the Universe that we did not already know about, the so called "unknown unknowns".

At Cornell we are involved in the North American Nano-Hertz Observatory for Gravitational Waves (NANOGrav) and the International Pulsar Timing Array.  The goal of our work is to detect the influence of gravitational waves on the arrival times of pulses at the radio telescopes we use.  We require high-quality millisecond pulsars (those spinning with periods of about 10 milliseconds or less) in order to achieve the timing precision required. The particular gravitational waves we are sensitive to have wavelengths of one to ten lightyears so we need to monitor the pulsars for five years and longer.  The effects are very small (about 100 nanoseconds or smaller) and therefore are difficult to measure.  Similar to laser interferometers like the Laser Interferometer Gravitational-Wave Observatory (LIGO) and VIRGO that target much shorter wavelength gravitational waves, we need to measure and remove many perturbations of the pulse arrival times, including physical effects in the neutron star and its magnetosphere, propagation through the turbulent interstellar medium, and of course effects in the solar system and the Earth. 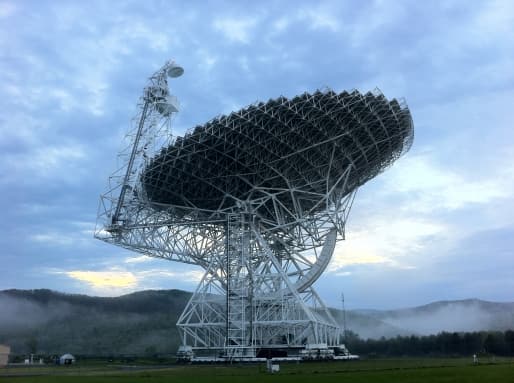 Gravitational waves that we expect to detect are associated with mergers of supermassive black holes that take place as part of the galaxy-merger process that occurs over cosmological time.  The ensemble of such mergers produces a background of gravitational waves that has a "red" power spectrum with significant power in the frequency band we are sensitive to.  Individual merging black hole binaries will produce chirped sinusoidal signals that will be detectable if they are relatively close to us cosmologically.  Finally, another effect is potentially detectable that would demonstrate the non-linear aspect of General Relativity.  This is the "memory" effect that corresponds to an outwardly propagating change in the dimensionless strain.  It would produce apparent discontinuities in the apparent pulse periods of the millisecond pulsars we observe.

The primary telescopes used by NANOGrav are the Arecibo telescope in Puerto Rico and the Green Bank Telescope in West Virginia.  The Cornell group collaborates internationally on this project so telescopes around the world contribute to the data that we are analyzing.  Later this decade, we will collaborate on usage of the MeerKAT telescope in South Africa, the Five-hundred-meter Aperture Spherical Telescope (FAST) now under construction in China, and the first implementations of the Square Kilometer Array in Australia and South Africa.

Gravitational radiation emitted by supermassive black hole binaries drives the binaries to merge. Through the final moments of such a merger, an explosion of bright gravitational waves is emitted and the spacetime surrounding the binary is permanently deformed. This permanent deformation propagates outward from the merger at the speed of light as something known as the "memory" of the gravitational wave burst. Ground-based laser interferometric gravitational wave detectors
are blind to memory, but memory may be detectable with pulsar timing arrays. As the train of pulses from a pulsar encounters this memory, it is slightly compressed or elongated and the rotational frequency of the pulsar will appear to change. If the memory is produced by the merger of billion-solar-mass black holes a gigaparsec from the Milky Way, the apparent fractional change in a pulsar's rotational frequency is predicted to be a few parts in ten to the fifteen. With world-class instruments like the Green Bank and Arecibo radio telescopes consistently observing some of the brightest and most intrinsically stable millisecond pulsars known over timescales of decades, such small instantaneous changes in pulsar rotational frequency will become detectable in coming years. Such observations will shed light on otherwise inaccessible information regarding the evolution of supermassive black holes and the strongest gravitational interactions in the universe.

The distance to a source is a fundamental quantity in astronomy, but notoriously difficult to measure accurately. Knowing the precise distance to a neutron star unlocks its use as an astrophysical laboratory in a variety of ways. For example, it allows a comparison of the rate at which the neutron star loses rotational kinetic energy (as measured by the <i>extremely</i> gradual slowdown of its pulse rate) to the power it emits at high energies, as observed by the Fermi gamma ray space telescope or the Chandra X-ray observatory. The measured velocity of a neutron star quantifies the kick it received at birth, and thus the degree of asymmetry required in supernova core collapse processes. Knowing the distance to a neutron star binary system and its predicted inspiral time scale allows us to infer the rate of gravitational wave events from catastrophic mergers that facilities like LIGO and VIRGO may detect.

For these (and many other) applications, a precise distance must be measured. At Cornell, we have devised new techniques for precision astrometry using the Very Long Baseline Array, a continent-spanning array of telescopes that operates in concert to provide the highest resolution view of the radio sky. The annual trigonometric parallax of a distant pulsar (its apparent back-and-forth wiggle compared to distant background quasars as the Earth goes around the Sun) is very small, but with our collaborators, we are now measuring such parallaxes at the sub-milliarcsecond scale.  Our current parallax record is 0.13 milliarcseconds, implying a pulsar distance of nearly 8 kiloparsecs - almost as far as the Galactic center.

In the future, the resolving power of the VLBA will be supplemented by the sensitivity of Arecibo, the GBT, and the phased VLA. Enabling the use of this High Sensitivity Array for precision astrometry is part of our ongoing work. 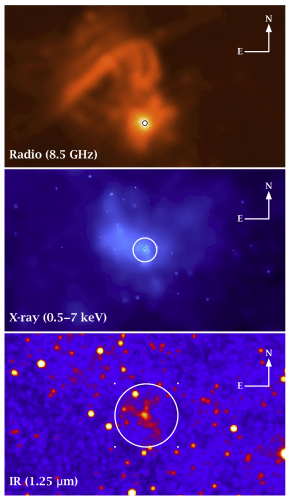 The central few parsecs of the Galaxy contain a supermassive black hole (called Sgr A*) and millions of solar masses worth of stars.  It is an extreme environment that could be uniquely studied with pulsars. By timing a pulsar that orbits Sgr A* on timescales less than about
100 years, properties of the black hole could be measured which may lead to tests of General Relativity (see Liu et al. (2012)) for details).  Observations of a radio pulsar within a few parsecs of Sgr A* would also provide an interesting probe of the distribution of ions and the strength of magnetic fields in the region.

Current estimates allow for as many as 1000 radio pulsars to reside within a parsec of Sgr A*, but none have yet been detected.  This lack of detections is due to the very strong scattering of radio waves caused by the turbulent interstellar medium along the line of sight from the Earth to the center of the Galaxy.  At 1 GHz (a common pulsar observing frequency), this scattering causes a pulse to be smeared out to thousands of seconds, which washes out the pulse train and makes the pulsar virtually undetectable in a periodicity search. Scattering is highly frequency dependent and can be mitigated by moving to higher frequencies where, unfortunately, pulsars are also much fainter.  Galactic center pulsar searches therefore need to balance the effects of scattering against the intrinsic spectra of pulsars.

Searches for pulsars around Sgr A* are currently being conducted at radio wavelengths with the newly upgraded Janksy VLA, the Green Bank Telescope, and many other observatories around the world. 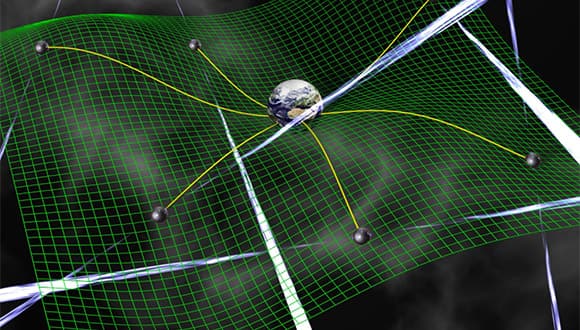