For as long as there have been people on Earth, we have looked up at the sky and wondered about the Sun, Moon, stars, and occasional dramatic events we saw there. But it is only in the past 50+ years that we developed the technical ability to leave our planet and actually visit other bodies in the universe.

Since the early days of space exploration, Cornell astronomers have played major roles in NASA missions to explore the solar system and distant universe. This strong tradition, going back to Thomas Gold and the Apollo mission to the Moon, and Carl Sagan and the early exploration of Mars by Mariner 9 and Viking, continues today. The Infrared Spectrometer (IRS), a major instrument on the Infrared Telescope Facility (Spitzer Infrared Telescope Facility), was developed by a group at Cornell. The focal point for the analysis of data being collected by this instrument is the IRS Data Center located at Cornell. Cornell planetary scientists played big roles in the NEAR mission which culminated in the successful landing on asteroid 433 Eros in 2001, and were responsible for developing the Athena instrument package for the Mars Exploration Rovers: Spirit and Opportunity. Under Cornell leadership the rovers collected a wealth of observational data on the ancient climate of the planet.

Stardust-NExT (Stardust-New Exploration of Tempel) is an extended mission that utilizes the already "in flight" Stardust spacecraft to fly by comet Tempel 1 in Feb. 2011 and extend the investigation of that comet by the Deep impact mission. Note - while the mission name has been changed to Stardust-NExT the spacecraft will continue to be referred to as "Stardust." 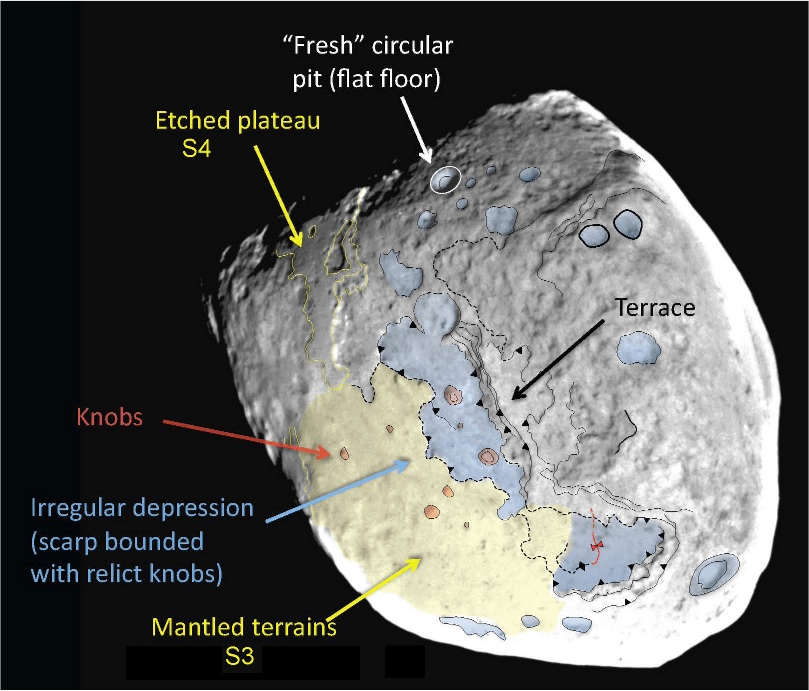 The primary science objectives of the Stardust-NExT mission were as follows:

Cassini completed its initial four-year mission to explore the Saturn System in June 2008 and the first extended mission, called the Cassini Equinox Mission, in September 2010. The Cornell Cassini researchers have diligently reviewed and researched the multitude of data provided by the mission. 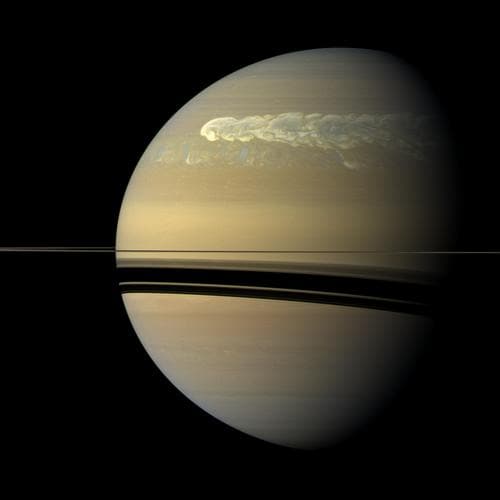 Cassini launched in October 1997 with the European Space Agency's Huygens probe. The probe was equipped with six instruments to study Titan, Saturn's largest moon. It landed on Titan's surface on Jan. 14, 2005, and returned spectacular results.

Meanwhile, Cassini's 12 instruments have returned a daily stream of data from Saturn's system since arriving at Saturn in 2004.

Among the most important targets of the mission are the moons Titan and Enceladus, as well as some of Saturn’s other icy moons. Towards the end of the mission, Cassini will make closer studies of the planet and its rings.

NASA's twin robot geologists, the Mars Exploration Rovers Spirit and Opportunity, launched toward Mars on June 10 and July 7, 2003, in search of answers about the history of water on Mars. They landed on Mars January 3 and January 24 PST, 2004 (January 4 and January 25 UTC, 2004). 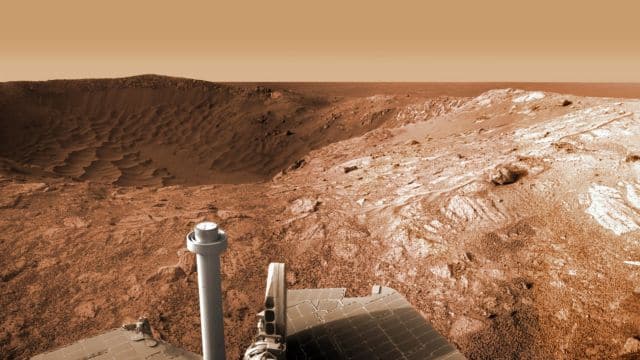 The Mars Exploration Rover mission is part of NASA's Mars Exploration Program, a long-term effort of robotic exploration of the red planet.  Professor Stephen Squyres, the scientific Principal Investigator, and the Cornell MER Team have analyzed the extensive data returned from the rovers and have provided new research insight in the composition of Mars and the possibility of water on the red planet.

Primary among the mission's scientific goals is to search for and characterize a wide range of rocks and soils that hold clues to past water activity on Mars. The spacecraft are targeted to sites on opposite sides of Mars that appear to have been affected by liquid water in the past. The landing sites are at Gusev Crater, a possible former lake in a giant impact crater, and Meridiani Planum, where mineral deposits (hematite) suggest Mars had a wet past.

After the airbag-protected landing craft settled onto the surface and opened, the rovers rolled out to take panoramic images. These images give scientists the information they need to select promising geological targets that tell part of the story of water in Mars' past. Then, the rovers drive to those locations to perform on-site scientific investigations.

These are the primary science instruments carried by the rovers:

Herschel, ESA’s cutting-edge space observatory, carries the largest, most powerful infrared telescope ever flown in space. A pioneering mission, Professors Martha Haynes and Don Campbell are using it to study the origin and evolution of stars and galaxies to help understand how the Universe came to be the way it is today. 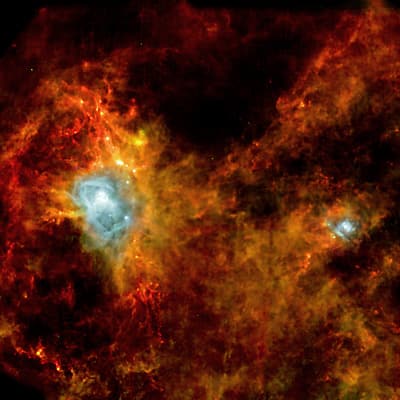 The first observatory to cover the entire range from far-infrared to submillimetre wavelengths and bridge the two, Herschel is exploring further into the far-infrared than any previous mission, studying otherwise invisible dusty and cold regions of the cosmos, both near and far.

By tapping these unexploited wavelengths, Herschel is seeing phenomena beyond the reach of other observatories, and studying others at a level of detail that has not been captured before. The telescope’s primary mirror is 3.5 m in diameter, more than four times larger than any previous infrared space telescope and almost one and a half times larger than that of the Hubble Space Telescope. Its size is allowing Herschel to collect almost 20 times more light than any previous infrared space telescope.

The spacecraft carries three advanced science instruments: two cameras and a very high-resolution spectrometer. The detectors in these instruments are cooled to temperatures close to absolute zero by a sophisticated cryogenic system.

Juno will improve our understanding of the solar system’s beginnings by revealing the origin and evolution of Jupiter.

THE GIANT PLANET STORY IS THE STORY OF THE SOLAR SYSTEM 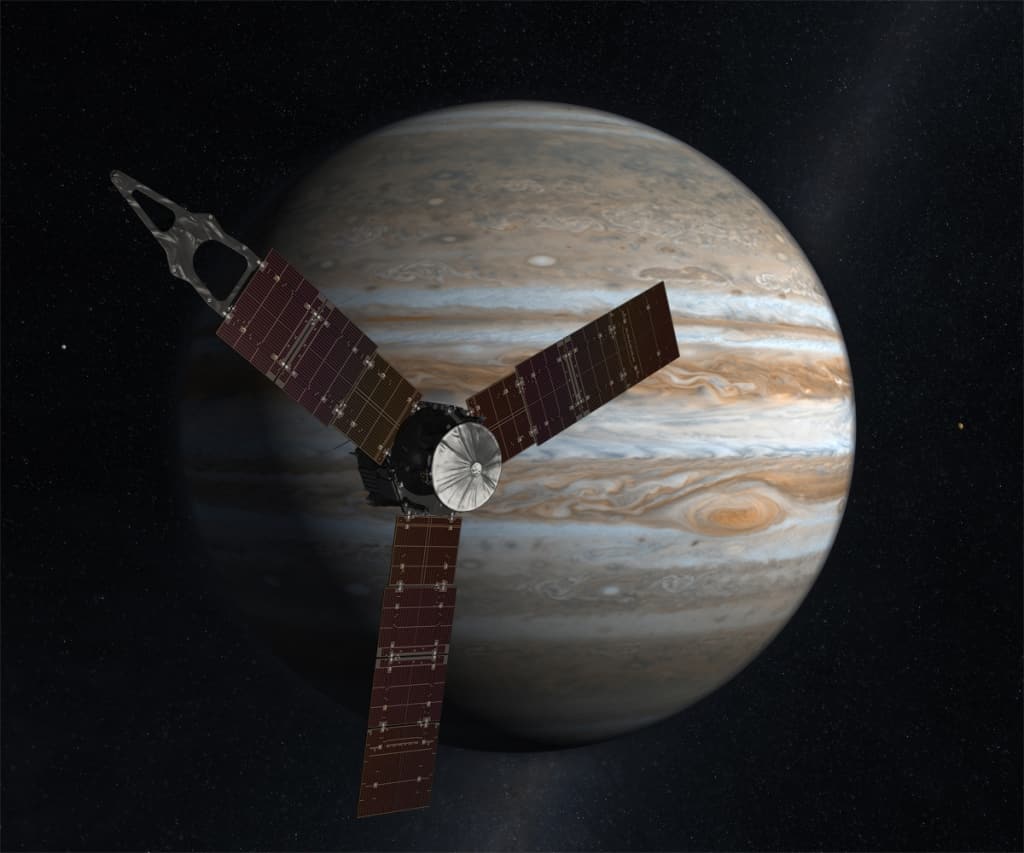 Juno’s principal goal is to understand the origin and evolution of Jupiter. Underneath its dense cloud cover, Jupiter safeguards secrets to the fundamental processes and conditions that governed our solar system during its formation. As our primary example of a giant planet, Jupiter can also provide critical knowledge for understanding the planetary systems being discovered around other stars.

With its suite of science instruments, Juno will investigate the existence of a solid planetary core, map Jupiter's intense magnetic field, measure the amount of water and ammonia in the deep atmosphere, and observe the planet's auroras.

Juno will let us take a giant step forward in our understanding of how giant planets form and the role these titans played in putting together the rest of the solar system.

T. Pyle (SSC)Theories about solar system formation all begin with the collapse of a giant cloud of gas and dust, or nebula, most of which formed the infant sun. Like the sun, Jupiter is mostly hydrogen and helium, so it must have formed early, capturing most of the material left after our star came to be. How this happened, however, is unclear. Did a massive planetary core form first and gravitationally capture all that gas, or did an unstable region collapse inside the nebula, triggering the planet’s formation? Differences between these scenarios are profound.

Even more importantly, the composition and role of icy planetesimals, or
small proto-planets, in planetary formation hangs in the balance – and with them, the origin of Earth and other terrestrial planets. Icy planetesimals likely were the carriers of materials like water and carbon compounds that are the fundamental building blocks of life.

Unlike Earth, Jupiter's giant mass allowed it to hold onto its original composition, providing us with a way of tracing our solar system's history. Juno will measure the amount of water and ammonia in Jupiter’s atmosphere and determine if the planet actually has a solid core, directly resolving the origin of this giant planet and thereby the solar system. By mapping Jupiter’s gravitational and magnetic fields, Juno will reveal the planet’s interior structure and measure the mass of the core.

How deep Jupiter's colorful zones, belts, and other features penetrate is one of the most outstanding fundamental questions about the giant planet. Juno will determine the global structure and motions of the planet’s atmosphere below the cloud tops for the first time, mapping variations in the  atmosphere’s composition, temperature, clouds and patterns of movement down to unprecedented depths.

Deep in Jupiter's atmosphere, under great pressure, hydrogen gas is squeezed into a fluid known as metallic hydrogen. At these great depths,
the hydrogen acts like an electrically conducting metal which is believed to be the source of the planet's intense magnetic field. This powerful magnetic environment creates the brightest auroras in our solar system, as charged particles precipitate down into the planet’s atmosphere. Juno will directly sample the charged particles and magnetic fields near Jupiter’s poles for the first time, while simultaneously observing the auroras in ultraviolet light produced by the extraordinary amounts of energy crashing into the polar regions. These investigations will greatly improve our understanding of this remarkable phenomenon, and also of similar magnetic objects, like young stars with their own planetary systems.

In Greek and Roman mythology, Jupiter drew a veil of clouds around himself to hide his mischief. It was Jupiter's wife, the goddess Juno, who was able to peer through the clouds and reveal Jupiter’s true nature. The Juno spacecraft will also look beneath the clouds to see what the planet is up to, not seeking signs of misbehavior, but helping us to understand the planet’s structure and history.

The Juno mission is the second spacecraft designed under NASA's New Frontiers Program. The first was the Pluto New Horizons mission, launched in January 2006 and scheduled to reach Pluto's moon Charon in 2015. The program provides opportunities to carry out several medium-class missions identified as top priority objectives in the Decadal Solar System Exploration Survey, conducted by the Space Studies Board of the National Research Council in Washington.

JPL manages the Juno mission for the principal investigator, Scott Bolton, of Southwest Research Institute in San Antonio. The Juno mission is part of the New Frontiers Program managed at NASA's Marshall Space Flight Center in Huntsville, Ala. Lockheed Martin Space Systems, Denver, built the spacecraft. Launch management for the mission is the responsibility of NASA's Launch Services Program at the Kennedy Space Center in Florida. JPL is a division of the California Institute of Technology in Pasadena.