Vera Cooper Rubin, MS ’51, was a pioneering astronomer whose studies on the Hill helped shape her life’s work—including the decades she spent gathering evidence to convince the scientific community that dark matter exists.

Despite early dismissals of her research and pervasive sexism in the field, she persisted—gathering crucial data to support the existence of the unseen material that binds entire galaxies together and is believed to make up more than 80 percent of the universe’s mass. The data on dark matter from dozens of galaxies that Rubin presented to the International Astronomical Union in 1985 ultimately changed scientific conceptions of the universe and opened new paths in both astronomy and physics. 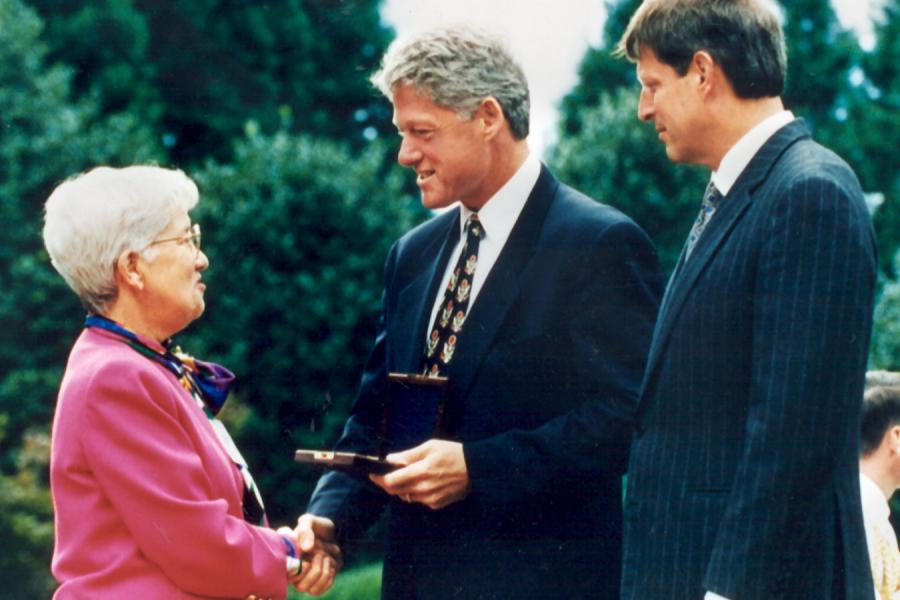 Vera Rubin receives the National Medal of Science from President Bill Clinton at the White House in 1993 as Vice President Al Gore (right) looks on.

Rubin, who died in 2016 at age 88, was a member of the National Academy of Sciences and a winner of both the U.S. National Medal of Science and the Gold Medal from the U.K.’s Royal Astronomical Society. “She was always curious about what makes galaxies tick,” says Martha Haynes, Cornell’s Distinguished Professor of Arts and Sciences in Astronomy. “That’s what has driven me for my career. And apparently it drove her, also.”

Haynes—also a pioneering scientist who has changed our understanding of the universe—knew Rubin for decades and considered her a colleague and a friend. They first met through Haynes’s work as a postdoc at the National Radio Astronomy Observatory in Charlottesville, VA. Later, in 1986, Rubin and Haynes—along with Riccardo Giovanelli, now an emeritus professor of astronomy at Cornell—co-authored a paper about a rapidly rotating galaxy.

Rubin, who grew up in Philadelphia and Washington, D.C., became interested in astronomy as a child—watching the stars, building her own telescope, and joining an amateur astronomy club. She earned a scholarship to Vassar College and graduated in 1948 as the only astronomy major in her class.

One summer, she met Bob Rubin ’48, PhD ’51, a graduate student in mathematics on the Hill. Vera matriculated at Cornell in 1948 and earned a master’s degree three years later. She went on to Georgetown University, where she earned her PhD in 1954. (She and Bob married in 1948; one of their four children would also go on to become an astronomer.)

While Rubin’s choice of Cornell was largely influenced by Bob’s educational path, science journalist Ashley Yeager — author of a recent biography of Rubin, "Bright Galaxies, Dark Matter, and Beyond" — makes the case that the decision was serendipitous.

In an interview with Vox, Yeager says she thinks that Rubin’s experience on the Hill—where she studied physics under such 20th-century luminaries as Hans Bethe, Philip Morrison, and Richard Feynman—put her on a trajectory for scientific discovery that she might not have found had she gone to Princeton (which didn’t accept women at the time) or Harvard (where she was admitted, but declined in order to join Bob in Ithaca).

Says Yeager: “There was intellectual freedom she had at Cornell, to be able to probe into different questions in astronomy that she probably would have been pushed away from had she been in a more structured graduate program.”

She was a really nice person, always very encouraging of younger people, and a really good scientist. She was someone I would consider a role model. And there weren’t many who were women.
— Martha Haynes, Cornell’s Distinguished Professor of Arts and Sciences in Astronomy

On the Hill, astronomy was then a very small department, with few graduate-level courses. But as Rubin recalled in a series of oral history interviews she gave to the American Institute of Physics in 1995–96, “Cornell was a very exciting place because of the physics.”

Cornell’s strengths in that field aided Rubin’s later PhD work at Georgetown: she had taken so many courses on the Hill that she had no remaining physics requirements to fill there, speeding completion of her degree. She went on to teach at her doctoral alma mater for a decade before beginning a long career at the Carnegie Institution’s Department of Terrestrial Magnetism in Washington, D.C., where she studied how stars orbit the centers of their galaxies. (Notable at the time, she was the first woman granted access to use the Palomar Observatory.)

Studying the Andromeda Galaxy—and then others more systematically—using spectrometers to chart orbital speeds of stars across galactic disks, Rubin and a colleague began to find measurable evidence that something other than visible mass was governing their motion. 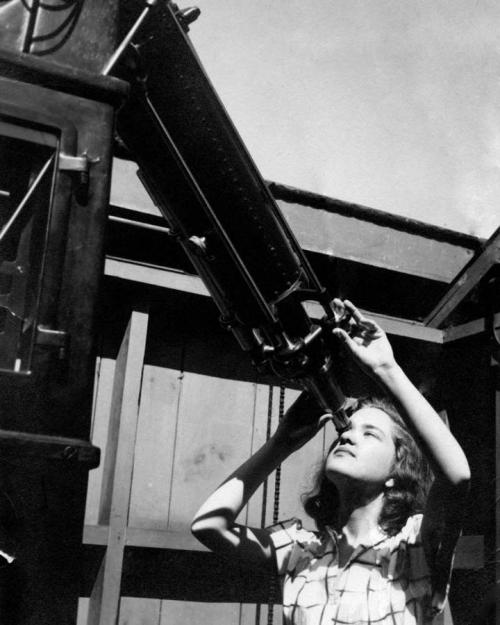 Rubin looks through a telescope at Vassar College at age 18. Her lifelong interest in astronomy began in childhood.

Their data consistently showed that stars further out from the center were moving much faster than would be expected, given what was understood about the mass and gravity distributed within galaxies. This “halo” of dark matter that Rubin discovered and charted around dozens of galaxies does not emit light and extends beyond the optical boundaries of each—and contains five to 10 times as much mass as the visible galaxy.

Rubin’s work was the first measurable, compelling, and scientifically presented evidence that supported a decades-old theory that unseen “dark matter” governed the structure and movement of galaxies.

Well into her 80s, Rubin continued to study the rotation of galaxies—including formation, mergers, and counter-rotation (where some stars and galactic material orbit in the opposite direction as the rest of the galaxy)—along with continuing research into dark matter.

“She was always out there as one of those people that I admired, respected, enjoyed, and liked very much,” Haynes recalls. “She was a really nice person, always very encouraging of younger people, and a really good scientist. She was someone I would consider a role model. And there weren’t many who were women.”

In addition to many awards and accolades, Rubin has been honored and memorialized with a named ridge on Mars, an asteroid, a satellite, a galaxy, and, most recently, the National Science Foundation Vera C. Rubin Observatory—the first national observatory named after a woman.

Read the story on the Alumni Affairs & Development website.